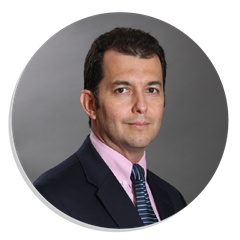 Eric has been working in the Human Resources field for more than 20 years in the consumer-packaged goods and pharmaceutical industries across Latin America.  He joined Kellogg after working in Kraft/Mondelez and at GlaxoSmithKline.
During this period, Eric worked extensively in the Americas and lived in Venezuela in 2008.  He has participated in multiple global business transformation initiatives working with Commercial, Manufacturing, and Corporate functions.  His main areas of expertise are leadership and team development, change management, employee engagement, organizational culture, and learning & development.

Eric received his MBA with a Finance major with distinction from Universidad de Costa Rica and is a certified practitioner of multiple Lominger/Korn Ferry and Hogan coaching and developing assessments and tools.

Since 2013 Eric has been involved with UWC starting as an advisor in Human Resources in the Costa Rica college. He then joined the Executive Board of UWC Costa Rica and the International Advisory Council at UWC International. Eric’s daughter, Isabel, is an alumnus of UWC Red Cross Nordic, Norway.