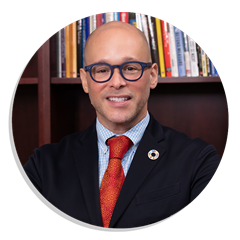 Dr. Angel Pérez was born in Puerto Rico and raised in New York's South Bronx. He is an education administrator, author, speaker, teacher, and student advocate. He currently serves as Vice President for Enrollment and Student Success at Trinity College in Connecticut, USA. He oversees Admissions, Financial Aid, Institutional Research, Career Development, and Retention in this role. He teaches in the Educational Studies department at Trinity and in the Summer, teaches at Rikkyo University (Trinity's partner in Japan). He has served in secondary and higher education leadership positions on both coasts of the U.S. and travels globally to speak on American education issues. The author of many articles and a textbook chapter, his writing is featured in the U.S and global publications. He was recently appointed to the New England Board of Higher Education by the Governor of Connecticut.
A passionate international educator, Angel is a Fulbright Scholarship alumnus and has a long relationship with UWC. He has traveled to many UWC campuses throughout his career to recruit, interview, and advise UWC students applying to university in America. Besides, he works closely on student success initiatives with UWC students on American university campuses. His passion for UWC became even stronger when he focused his Ph.D. thesis on the entire UWC system. He traveled to UWC campuses worldwide to understand how a complex, multi-national, service-oriented organization operationalizes its mission. Angel is thrilled to serve on UWCCR's Board of Trustees, a campus he feels most connected to, given his own Latino roots and commitment to intercultural and bilingual education.
Back